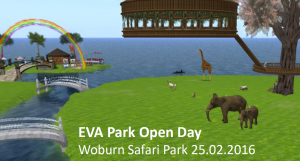 An EVA Park Open Day was hosted at Woburn Safari Park on 26th February 2016. An audience of 70 people, most of whom were speech and language therapists, stroke survivors or their family members.

Professor Jane Marshall opened the day with an overview of the recent research project, which evaluated a therapy delivered in Eva Park with 20 people who have aphasia. Results showed excellent uptake of therapy with significant benefits on a test of everyday communication. Users’ views were also overwhelmingly positive. For example, one said: ‘Wonderful. Well it’s wonderful. Well it’s all my expectations are real’.

The next presentations were from John Smeijka, who was a participant in the project, and Abi Roper who was one of the support workers delivering the therapy. John talked about his experiences of aphasia and how Eva Park helped, while Abi outlined some of the techniques she used to deliver language stimulation in Eva Park.

Speaking on the day about Eva Park, John said: “I was invited to take part in the first season which took five weeks. There were five people like me, with aphasia and five people who were helpers, my helper was Abi. We had group chats on Fridays, we met up in the tree house the topic was current affairs, I read the newspaper first and we talk about that. Abi encouraged me to keep trying to say what I wanted to say. It was a challenge and was really really hard work, but it was amazing.”

The audience then had the opportunity to try out Eva Park at five computer stations and to discuss how it might be used to augment aphasia services. Many were able to meet other project participants who were online in Eva Park. Finally guests were invited to meet Woburn’s real life safari animals, a fitting end to the day.

In her closing talk, Stephanie Wilson outlined the future plans of the research team. With new funding from The Tavistock Trust for Aphasia they plan to develop the technology further, so that it can be released to clinical practitioners, and evaluate other forms of therapy delivered in EVA Park.

“It was wonderful that so many service users and providers were able to join us in the beautiful surroundings of Woburn Safari Park to hear about the virtual island that we have created for people with aphasia. We are very excited about the therapeutic opportunities of Eva Park and it was great to see that our excitement was shared by the audience. We are very grateful to the Duke of Bedford for his generous hospitality and for making this day possible.”

See here for more information on the day. 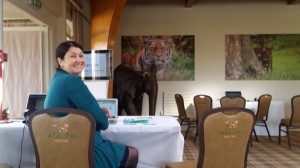 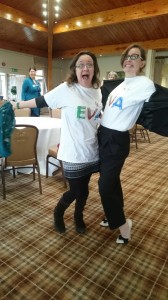 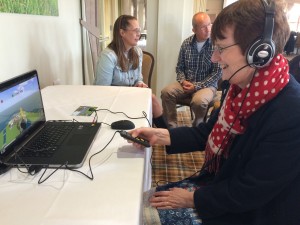 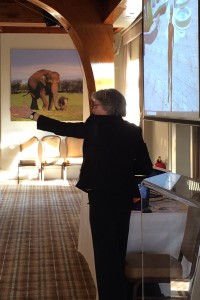 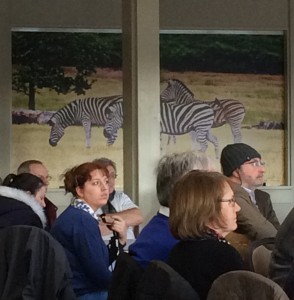 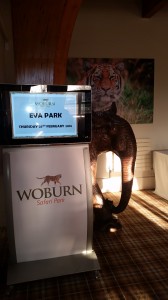 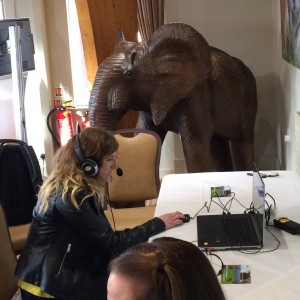